Skin Cancer – What You Need To Know!

Skin is the body’s largest organ, it covers the body and protects it from injury, temperature and dehydration.

There are 3 main types of cells in the top layer of the skin (called the epidermis) seen below: 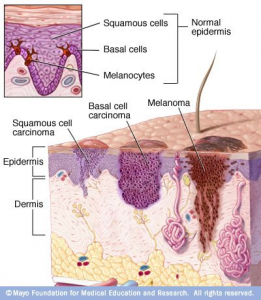 About 2 out of 10 skin cancers are squamous cell carcinomas (also called squamous cell cancers). The cells in these cancers look like abnormal versions of the squamous cells seen in the outer layers of the skin. These cancers commonly appear on sun-exposed areas of the body such as the face, ears, neck, lips, and backs of the hands. They can also develop in scars or chronic skin sores elsewhere. They sometimes start in actinic keratoses (described below). Less often, they form in the skin of the genital area. Squamous cell cancers are more likely to grow into deeper layers of skin and spread to other parts of the body than basal cell cancers, although this is still uncommon.

are dome-shaped tumors that are found on sun-exposed skin. They may start out growing quickly, but their growth usually slows down. Many keratoacanthomas shrink or even go away on their own over time without any treatment. But some continue to grow, and a few may even spread to other parts of the body. Their growth is often hard to predict, so many skin cancer experts consider them a type of squamous cell skin cancer and treat them as such.

These cancers develop from melanocytes, the pigment-making cells of the skin. Melanocytes can also form benign (non-cancerous) growths called moles. Melanomas are much less common than basal and squamous cell cancers, but they are more likely to grow and spread if left untreated.